The Art of the G: How to pour a pint of Guinness.

Baby Guinness: One who has only been drinking Guinness a short while.

Bit o’the cream: A pint with decent creaminess, just not the ultimate in creaminess.

A Black One: A pint of Guinness

Cream-leak: When some cream dribbles down the side of the glass off the untouched head. A major leak could suggest a watery pint but a small, slow dribble suggests a healthy one. 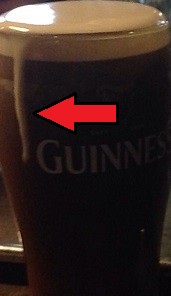 Finisher: The final gulp, including the remnants of the head. This gulp can be a little bit of heaven…. or hell!

A fizzy-header: A pint so bubbly (full of carbon dioxide) the head actually fizzes over. This is no cream leak, no, it’s clearly a watery overflow. When you see this you know you’re fucked.

Fluffy bubble-head: Type of head guaranteed terrible pints have before they’ve been touched. You know you’re in trouble when you see one of these.

G-mood: How you feel depending on how good the Guinness you’re drinking is.

G-sniff: That smell you automatically get when yer nose is right in the glass as you gulp it down.

Giant collar: The head on a pint that is way outside acceptable levels. You can see these coming a mile off as the head just grows & grows as the pint settles in front of you. One of these is really bad omen; you should technically ask for another pint. 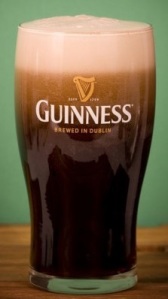 Gulp-gargle: Up to 3 gulps taken in tandem.

The G-plunge: Just going ahead & ordering the pint even though yer not too sure the quality’ll be up there at all.

G-tache: The Guinness moustache created from the lip flop of a decent, creamy pint. All good pints will give you one. A watery-wan will not give you a G-tache.

The G-train: The state of regular Guinness drinking.

G-drought: Ages without having a pint.

The Knowledge of the G: Being able to tell if it’s a bad pint from the look of it.

Lip-flop: The first touch of the creamy head onto your top lip.

Pencil-tache head: When the head dissipates to nothing but a slight, bubbly line. You can always see all the bubbles in these poxy heads & they are the classic sign of a shite pint. There’ll be little or no cream sticking to the glass as you make your way through. John Waters, the classic pencil-tache owner, wears his with pride & well he should, he’s been sporting it for over 30 years, but for a pint of Guinness this is a fashion faux-pas!

Pintability: How good the pints of Guinness are in a particular establishment.

Pintarmability: The ability to carry pints with a minimum of wastage.

Pre-G: The salivating you do ahead of pint of Guinness.

Priests’s collar: The creamy, post-settlement head on a lovely pint of Guinness.

Settler: The first-pour pint sitting at the bar waiting to settle down some before being topped off.

The Slops: The pour overspill from collective beers that rests below the taps behind the bar.

Slurping from the G-trough: A crowd of lads sittin round drinking pints of Guinness.

Squinty-wince-face: The contortions your face makes when you guzzle on a rank-bad pint. This especially applies to that last gulp on a bad one, where you get the remnants of a manky head in too.

A Struggler: A pint that’s tough to get through coz it tastes manky.

Watery-wan: An watery pint. Unacceptable & generally the portent of a terrible pint.

A Wetty: A lip flop with no stick about it. It just drains down yer face. Generally a very bad sign.

Wobble-test: A little shake of a fresh pint, being careful to spill any, that can let on if it’s a watery-bastard. Obviously the creamier the head, the less chance of a spill there is.

33 thoughts on “Glingo: The Vernacular”